Starters, Entrepreneurs & Investors who want to stay in Thailand long-term

Which flags will be covered?

What conditions for tax residency?

officially: 183-day rule
Unofficially: It's hard to become tax resident at all, and nearly nobody is interested in you as long you don't make business locally

Only foreign income is exempted for personal income tax if certain conditions are met.

In this article and video, I want to cover how the tax system in Thailand works and what possibilities are available to live there tax-free.

If you consider setting a residency flag in Thailand, please read my article "3 ways to live in Thailand long-term".

There I will cover 3 interesting options to get a long-term Visa and also how to "test" Thailand before with a long-term tourist visa.

Basic concepts of the Taxation system in thailand

Thailand has as most countries of the world the residency-based taxation and will tax you on your worldwide income.

Officially you have to stay 180-days of the tax year in Thailand to become a tax resident.

Question:Do the immigration in Thailand provide information to Thai tax authorities regarding when a person enters or leaves Thailand? No (upon request only).

To become a tax resident in Thailand it's not that easy at all. Like in most Southeast Asian countries nearly nobody is interested in you or foreigners living there. At least if you don't do business locally.

I know a few expats who moved to Thailand long-term and they are not on the radar of the Thailand tax authorities.

This is a crazy fact, especially if you come from a high taxation country where everybody is chasing you for little accrued tax.

I had a lot of clients from Germany who were not able to deal with this in the beginning  and they were so afraid that nobody was writing to them or demand something.

When we were living our whole life under the pressure of authorities it's not easy for everyone to let go.

We from InternationalizeNow are helping you to release yourself from your tax burden and not to jump from one nightmare to another. It's a gift from God that nobody is interested in us. For me this a basic human right to be left alone.

Roland Baader said, "The only true human right is the right to be left alone."

So as long as we play by the rules and nobody is interested in us, we should be thankful and take that gift.

As you can see it's hard to obtain a local tax ID in Thailand as long as you are not employed there or do business locally.

If you can acquire a tax ID, it makes sense to pay at least some taxes for the fact if someone in your home country is asking you where you pay taxes.

How long this will last is not for sure and also it's not a good idea to build on that a strong fundament of an international tax optimized strategy.

So you should know about some interesting facts of the Thai taxation system that if someone tests you, you play by the rules.

There's an interesting fact about the tax system in Thailand. Most people don't know about it.

The first thing I told you already: Nearly nobody is interested in ex-pats living in Thailand as long they are not working in Thailand or do local business.

The second thing: With the right structure, foreign income is exempt from income tax.

The rule is the following one:

Residents who derive income from abroad are taxable on that incomeif remitted into Thailandin the year in which it is received.

Let's say foreign income (like dividend payment) is received on a foreign bank account and will be not remitted in the same year to Thailand. This income would be considered to be exempt from personal income tax.

Of course, you should always seek advice from a local tax advisor to be sure you are safe.

As you can see, it's possible to live legally tax-free in Thailand. What are your thoughts about this? Let me know with a comment:

Do you want to see results?

Are you tired of searching for your perfect international structure?

We can help you to legally reduce your taxes, get your second residence and passport, and build your solid and holistic international strategy.

The only thing you have to do now: Schedule an appointment for your free strategy call.

Sergio von Facchin is Author, Global Citizen, Perpetual Traveler, and an Internationalization & Global Tax Planning Expert. On our webpage, I will show you where you find the best options on this planet for your business and yourself! Legal strategies for tax optimization, how you can fast grow a fortune and how to live a free life. For that, I travel to dozens of countries every year. I research the best options around the globe and tell you about them here at InternationalizeNow.com, so you can implement the strategies in your life. I and my team will help you if you like with your tailored international strategy. For more information about how we can help you, please visit this page ->

Move to Thailand: 3 ways to live in Thailand long-term 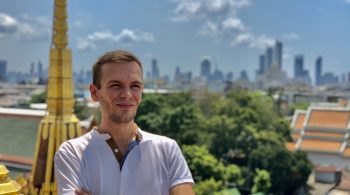 Move to Thailand: 3 ways to live in Thailand long-term

1 Response to "Living tax-free in Thailand"